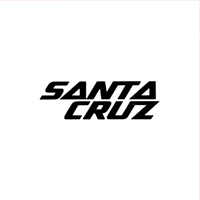 Santa Cruz Bicycles, a manufactuerer of high end mountain bikes was founded in 1993, in a space the size of a single car garage in the Seabright Cannery, in Santa Cruz, California.

The first bike, the Tazmon, was a single-pivot dual suspension bike that defied established sensibilities. At the time full-suspension bikes were far from the norm, and a do-it-all bike with rear suspension was considered highly irregular.

But for the founder, skateboarding legend, Rob Roskopp, he could see that full suspension was an innovation whose time had come. And ever since Santa Cruz has continued to build bikes that allow riders to go further, faster, and higher, for longer.

the company acquired the patents for their Virtual Pivot Point (aka "VPP") from Outland Bikes around 1999.

Currently the company manufactures around a dozen models of high performance mountain bikes for true cycling enthusiasts. Made of carbon fiber and aluminum. Their bikes are cover everything from hardtails to 8.5” travel downhill bikes, suited to a wide range of mountain biking activities.

In 2013, a single model, the "Juliana" was spun off as a stand-alone brand and range of mountain bikes for women, designed by and named for Juli Furtado.

Santa Cruz (under the brand Reserve) also produces high-end carbon wheels which have set a new standard for strength and reliability.

All their Santa Cruz frames and Reserve wheels come with a lifetime warranty. Every one of their bikes is an embodiment of the desire to ride and build the highest quality bikes in the world, bicycles and components that are reliable, durable, long-lasting, and serviceable, backed with a guarantee that reinforces the belief that Santa Cruz makes the best possible product.

Santa Cruz Bicycles was founded on one objective: to make mountain bikes that are "Simply advanced”.

By Pioneering technology that results in bikes that perform exceptionally well and are built to last means Santa Cruz Bicycle owners never gets to suffer “Missed Rides”.

Every model is custom built to specifications by skilled bike fans who understand and appreciate the products. Transforming the obsession for quality into making better experiences for riders.

Santa Cruz offers a lifetime of rider support because we’ve been focusing on building “Quality Bicycles since 1994”.